Looking for some new breakfast ideas? Try this hearty and delicious barley breakfast porridge with added almond milk, nuts, seeds, and honey. The porridge can be made ahead of time to enjoy throughout the week.

Breakfast porridge is a healthy way to start your day. It's comforting, filling, and healthy. But eating oatmeal every day can get old. I offer you to change up your breakfast routine by trying this barley cereal.

It quickly became one of my favorite nutritious breakfasts that keeps me full and energetic until lunch.

Barley has three times more fiber than oatmeal and the lowest glycemic index out of all the grains.

There are a few different Types of Barley, that have different nutrition profiles and require different cooking times.

I always use Pearl or Hulled Barley. Hulled barley is a whole grain with only the outer shell removed and requires soaking and more cooking time. Pearl barley cooks faster but the grain has barn and parts of endosperm removed, which makes it a little less nutritious.

I often make a big batch of Barley in Instant Pot and keep it refrigerated for up to 3-4 days. When you’re ready to serve it, just add milk and reheat it in a microwave or a small saucer pan.

Please, see the recipe card below for ingredients quantities.

How to make pearl barley porridge

Step 1. Rinse barley a few times to get rid of possible dust and dirt. In a medium saucepan, add rinsed barley and water. Bring it to a boil, and simmer covered on low for about 40 minutes or until the barley is cooked.

Note: if you prefer your porridge hot, add milk to the pot with cooked barley at the end.

No, barley contains gluten and should be avoided if you are following a gluten-free diet.

Yes, barley porridge is an excellent source of dietary fiber, manganese, selenium, and Vitamin B1. Barley has a low glycemic index of 28. It can keep you full and energetic for a prolonged periods.

Other recipes with grains 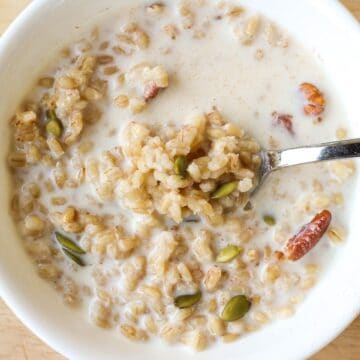 Hi there, I'm Nataliia. I am a content creator behind Sava's Kitchen. Here, you will find a lot of healthy family-friendly recipes. My focus is to create versatile nutritious recipes that taste great and are easy to make. Learn more about me by clicking below!

We use cookies on our website to give you the most relevant experience by remembering your preferences and repeat visits. By clicking “Accept”, you consent to the use of ALL the cookies.
Do not sell my personal information.
Cookie SettingsAccept
Manage consent

This website uses cookies to improve your experience while you navigate through the website. Out of these, the cookies that are categorized as necessary are stored on your browser as they are essential for the working of basic functionalities of the website. We also use third-party cookies that help us analyze and understand how you use this website. These cookies will be stored in your browser only with your consent. You also have the option to opt-out of these cookies. But opting out of some of these cookies may affect your browsing experience.
Necessary Always Enabled
Necessary cookies are absolutely essential for the website to function properly. These cookies ensure basic functionalities and security features of the website, anonymously.
Functional
Functional cookies help to perform certain functionalities like sharing the content of the website on social media platforms, collect feedbacks, and other third-party features.
Performance
Performance cookies are used to understand and analyze the key performance indexes of the website which helps in delivering a better user experience for the visitors.
Analytics
Analytical cookies are used to understand how visitors interact with the website. These cookies help provide information on metrics the number of visitors, bounce rate, traffic source, etc.
Advertisement
Advertisement cookies are used to provide visitors with relevant ads and marketing campaigns. These cookies track visitors across websites and collect information to provide customized ads.
Others
Other uncategorized cookies are those that are being analyzed and have not been classified into a category as yet.
SAVE & ACCEPT